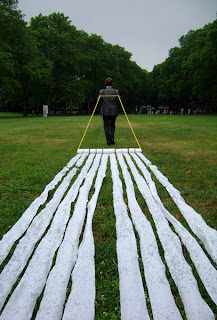 Now many of you that are familiar with my blog know that I prefer the art-object to performance art, Modernism to Conceptualism.  But "good" art is beyond personal taste.  When I talk about art being good I'm referring to one thing only: every work of art has inherent in it the criteria by which it is judged... if the art completely transcends these criteria its great, if the art is effective then its good, if it is ineffective its bad, and if the criteria by which it is judged are incoherent its horrible.  I like David Bernstein's work because I get it... his work it concise, clear, creative, and simple.  He's really good at what he does.  Also, I think David's work is successfully positioned between two pillars of art, in short, Picasso and Duchamp.  On the one hand he discovers his art through the process of making it like Picasso did, and on the other hand his work has a very dry conceptual character like Duchamp's (not to mention his use of ready-made objects).

I first met David at a Bruce High Quality Foundation University group critique.  At that crit he did a collaborative performance installation kinda thing.  Sounds like art-speak huh?  In laymen's terms, him and another artist used several different objects that they'd selected from their homes, like tiolet paper, lamps, a record player... and then took turns, like chess, arranging and rearranging one or two object at a time until they felt content and stopped.  On his website yesyesdavid.com he explains...


David explores thinging (a reciprocal process of thinking, making things, thinking through things, and seeing things differently through thought). The objects that emerge become thinking tools, familiar objects transformed through minimal gestures into autonomous forms. These are potential forms. Let's call them spatulas in honor of Donald Winnicott's game with the same name. These spatulas are used in conversations or products of conversation. They sometimes are conversations. They can be used for telling stories and at other times they can be used as art. Sometimes they are simply spatulas.

Anyway, I love his performances, so I asked him if I can interview him for this blog.  He said sure and told me to contact our mutual friend and artist Stephen Wuensch.  He told me to ask Steve about the two objects David sent him in the mail and that what would happen next would be his interview.  Sounded like fun!  So we did it.

But first take a look at some pictures of his past work... 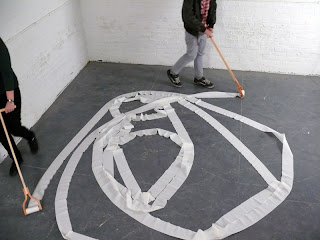 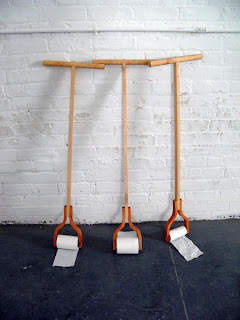 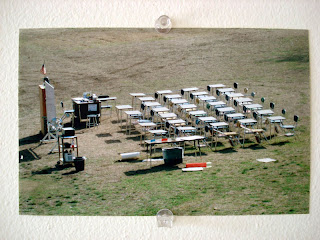 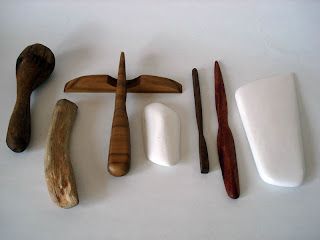 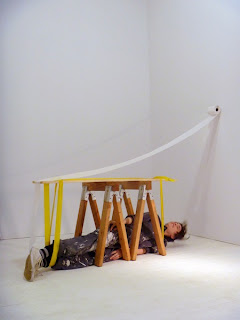 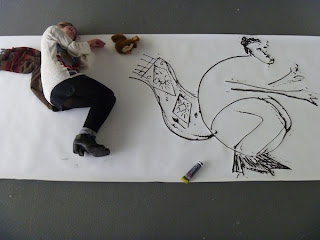 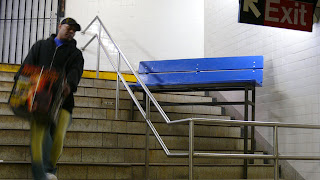 Now to the "interview".  I met up with Stephen Wuensch at The Market on the 9W on the New York-New Jersy boarder.  Its a great little joint for beer, coffee, food, whatever.  Anyway, Steve showed me the two objects David sent him... a children's book in Dutch and this small piece of wood that obviously had some kind of use... and I obviously don't know what that use was.  Steve set up his camera on an outdoor wooden bar and we started our conversation.

Here are some of my observations...

We made the rules on our own without much talking about it before hand (we both know David's work so I'm sure that helped us figure out what to do)... it took on a life of its own from the start.

I immediately fell into a kind of Judo approach.  By using Steve's arrangment of the two objects as a foundation I'd create a new composition by making minor changes... like rearranging the book from below the wooden piece to on top of the wooden piece.

My decision making process on how to rearrange Steve's compositions came by imagining what would look most interesting from the cameras point of view.  I imagined all the images being put together in succession like stop motion animation.  "That would be the way this collaboration would be presented" I thought, so I kept that idea in the back of my head and imagined the book jumping from side to side or the composition flipping from left to right.

The surface of the bar that we used for our collaboration as well as the sinking evening sun and lush green leaves in the background of the photographs played just as important roles as Steve and I moving the objects around... well maybe slightly less important roles... but still essential ones.

The collaboration ended the same way most conversations ends.  We both kind of grew tired of talking and were ready to move on... so we stopped without any real discussion.


From 2006- 2011, David lived in Brooklyn and has now moved to Amsterdam to pursue a masters at the Sandberg Institute.  You can see more of David Bernstein's work at yesyesdavid.com and you can see more of Stephen Wuensch's work at http://stephenwuensch.blogspot.com.  Thank you David and Steve!